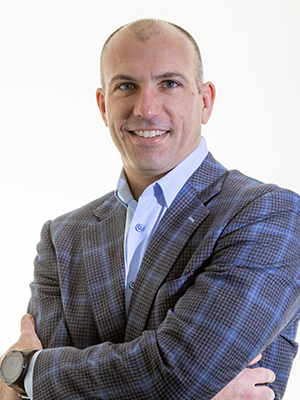 Dr. Matt was raised in Berwick, Pennsylvania. When he was 8 years old, his aunt needed all her teeth extracted, which allowed him to witness the changes in her quality of life, including her inability to speak or eat healthy foods. Dr. Matt was intrigued and began a mentorship with his general dentist at the time, and that inspired his dental career at a young age.

While earning his undergraduate degree in biology at Susquehanna University, Dr. Matt was a four-year letterman for the Crusader basketball team. He attended Temple University’s Martin Kronberg School of Dentistry, the second oldest dental school, where he earned a scholarship with the United States Air Force.

Following graduation from dental school, Dr. Matt attended Officer Training School, where he earned the rank of Captain and was appointed Vice Commander. In 2001, Dr. Matt completed a one-year residency in advanced education in general dentistry, during which he spent his time being individually trained by board-certified specialists in oral surgery, periodontics, prosthodontics, and endodontics. During his service at Kessler Air Force Base in Biloxi, Mississippi, he was honored as the chief resident and awarded his anesthesia credentials, which enabled him to provide both sedation and surgical care to his patients.

Dr. Matt furthered his surgical skills on a humanitarian mission to Guatemala with a team of physicians in 2003. He spent the next two years honing his dental and surfing skills in Santa Barbara, California while stationed at Vandenberg Air Force Base.

Dr. Matt was honorably discharged from the Air Force in 2004, and returned to the east coast to work at several large dental practices throughout the state of New Hampshire, focused on digital dentistry, wisdom tooth extraction, and grafting and implant procedures.

In 2008, Dr. Matt decided he wanted to practice closer to his home on the coast, so he opened Abenaki Dental Care in Exeter, which allowed him to provide comprehensive dental care to the local community.

Dr. Matt furthered his education in 2012, when he completed a surgical fellowship in implant dentistry with world-renowned implant expert Dr. Carl E. Misch in Orlando, Florida. He achieved fellow status at the Misch International Implant Institute and was inducted into both the Implant Prosthetic and Surgical sections of the International Congress of Oral Implantologists.

In 2016, Dr. Matt completed a mini-residency at the Craniofacial Pain Center at Tufts University School of Dental Medicine, expanding his knowledge on TMJ disorders and sleep apnea. He now works closely with local sleep specialists to develop solutions for our CPAP-intolerant patients.

Dr. Matt continued his quest for dental knowledge in 2018, when he completed a mini-residency in state-of-the-art endodontics with Dr. John West at the Interdisciplinary Dental Education Academy.

Check out our patient
education videos!